Dayna Pidhoresky on booking her ticket to the 2020 Tokyo Olympics

After a stunning personal best at the Toronto Waterfront Marathon, the BC runner is gearing up for her next challenge

What was going through your mind when you were approaching the finishing line, knowing what you were accomplishing?
"We did it!!!" and of course, "I think I can make it to the line before collapsing!"  That final turn around the last corner was a relief and my day could not have gone any better.  I knew I'd secured my spot on the 2020 Olympic team without a doubt and that's precisely what we went there to do.

What was the highlight of your day?
Seeing that clock as I ran towards the finish line and breaking the tape is something I will never forget.  It was a special moment with Alan Brookes immediately after I crossed the line and seeing Josh (my coach and husband) just seconds later was an even greater moment.  He's been the brains behind the operation for over 10 years and I finally showed off all the hard work we had put in.  This win was a win for both of us and the rest of the team that surrounds me. 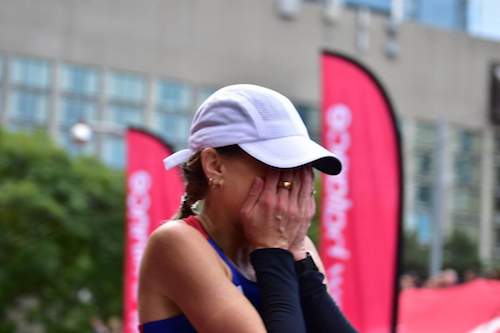 Dayne Pidhoresky reacts to her winning run in Toronto. Photo by Kimen Petersen

What was the most challenging part of the race for you?
The last 10-12K were a struggle.  I felt amazing up until that point and then fairly quickly I felt like the wheels were coming off.  It was encouraging to know that I still had a decent buffer to be under the Olympic standard of 2:29:30 and that kept me motivated.  I approached that final stretch with caution to ensure that I could actually make it to the finish line because collapsing in the last few kilometres was not an option.

How did you celebrate?
We had planned on heading to Milk Bar Toronto after the race to indulge in some cake.  Beforehand, I had mentioned that to Krista DuChene who was on the broadcast for the event. After the race they tracked down an entire cake and Alan Brookes presented it to me at the press conference. It was hilarious and also very delectable!

You’re going to Tokyo! How does that feel?
It feels spectacular but also very surreal.  Post-race I was worried I was going to wake up the next morning and the race would not have happened yet. 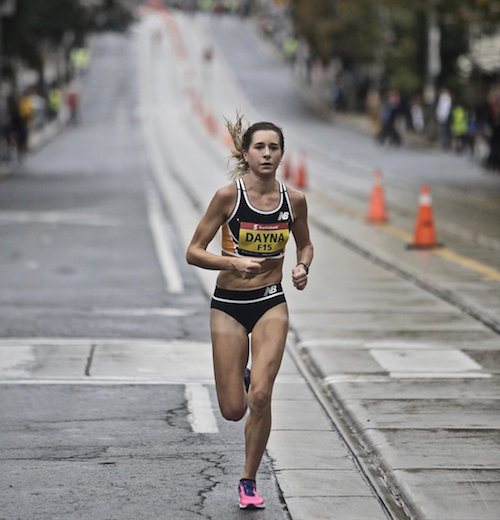 And when does training begin for that?
Josh will work back from Tokyo and decide when to start that buildup. The dedicated focus for that event will probably begin in May but I will never stop training, outside of recovering from Sunday's race.

Tell me about your approach leading up to the race.
We trained to run under the Olympic standard.  During workouts, my mindset was always to not force paces and thankfully the last 7 weeks of training came together easily wherein my marathon efforts were in the 2:28-2:30 range.  I approached the start line on Sunday feeling confident in my fitness and latter stage strength.  I hoped to run with the 1:14 pace group through half but for whatever reason, that first 10K was way faster than planned.  It worked out alright in the end:)

Is this your career highlight so far?
Most definitely. This will be a tough one to beat!