A feature interview by Nicky Cameron

Eco-Challenge Fiji is a 10-day adventure race in which 66 teams of four (among them Team Canada Adventure), make their way across 671 km of Fiji on foot, bike, a variety of boats, ropes, and more. The action is caught by an army of camera people and drones, with Bear Grylls narrating the drama as it unfolds.

It’s dazzling and compelling television, leaving the viewer with enduring images of Fijian beauty, suffering muddy athletes, and a pile of soggy Kleenex from the affecting personal stories the show wrings out of the event. 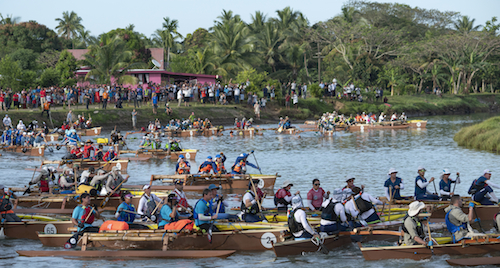 When we catch up with Bob Miller, captain of Team Canada Adventure and race director for the popular Wilderness Traverse adventure racing series, he’s busy. With a new baby and a new house to renovate, Bob doesn’t exactly have the time to spend all day on the computer, but he’s delighted by the firehose of interest in adventure racing and his business stemming from the popular series.

“Oh my gosh, I’m in the middle of a million things.  You would not believe the traffic on the Wilderness Traverse website,” he says. “I have so many emails to respond to — all the congratulations, which is wonderful, and then mixed in demands for training and coaching and new races. I could just email all day.”

While both Miller and Ford have lengthy adventure racing resumes and even competed in earlier versions of Eco-Challenge (the show ran from 1995 – 2002), neither Atkins nor Kolbl are tried and tested adventure racers. The team completed the course successfully (no ranking spoilers), but Team Adventure Canada wasn’t a focus for the show.

That doesn’t mean they aren’t a subject of intense interest for Canadians though — or that they don’t have a great story to tell! Bob was happy to take some time to share some stories about his experience, his motivations, and his middle of the ocean hallucinations. 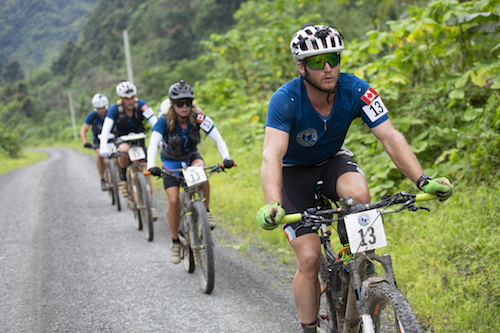 You’ve got two kids and a lot on the go – what made you want to do the race in the first place?
When I first heard about Eco-challenge, I wasn’t even sure I wanted to do the work of preparing and training for another expedition race. But, then I started to remember how cool the other Eco-challenges were. Eco-challenge is why we all started doing it in the first place! No one does it like Burnett [Mark Burnett, executive producer of Eco-Challenge].

What was different about this race for you this time?
I haven’t done an expedition race for seven years, and I went into this one with a different mindset. I took racing too seriously when I was full-on, but I went into this trying to enjoy the experience as much as the racing. With kids, you’re sacrificing so much to be away. You have to try to have the best experience possible. And I found it helped with the racing! On those tough days, I would just look around and think, oh my god, look where we are.

The landscape the show reveals is breath-taking. What were some of the highlights?
There was so much beauty, but actually, the leg where we could hire local porters to carry our gear through a trek was an incredible experience. We had three guys and one girl. They could haul! They were so impressive. But we could talk to them about their kids, and the village they were from. It was such a cool cultural experience.

The show is pretty impressive; I cried almost every episode.  But you’re barely in it, despite having a very successful race! Were you disappointed when you saw how little air-time you got?
Oh my god (laughs), not at all — I don’t care! I didn’t think we’d even be featured at all. I figured we had a one in 10 or 15 chance of being on the podium. And then we had a great race! Anything else that happened was just going to be gravy.

At the start of the race, they had info cards for each of the teams. Some of them had stickers, indicating that those were the teams they’d be following, and of course, we didn’t have a sticker. You know that scene at the beginning, where Bear [Grylls] comes in and the course is unveiled? We had a spot right in front. And they moved us off to one side! They already knew who they wanted on camera.

Were there any times you had out there that you thought were made-for-TV moments?
Well, I think they should have used our audio from the final paddle. They put microphones on us. We hadn’t slept the previous night due to a navigation error. So when we got on the water for the final paddle at 8 or 9 the next night, we were sleepy. Waves were crashing over us, but I still fell asleep a hundred times and woke up with the paddle still in my hands.

We made a small navigation error and had to correct, but that sent us straight into a headwind. We were all so messed up from fatigue, we thought we were stuck in some kind of deadly convergence of currents. It felt like there was this conveyor belt of water moving under us. Scott knew we were just heading into a headwind, but the rest of us wanted to ferry out of the imaginary “current,” so we were veering off course, we’re all yelling at each other…. That was wild. We were shocked to find at the end that we had maintained our place.

That sounds like a moment... How did you get along with your teammates during the rest of the race? Both Ryan and Rea are superstars in the obstacle course racing world, and you had never raced with them before.

Before the race we talked with a sports psychologist — that was Ryan’s idea. We talked about our biggest weaknesses and strengths, which was cool. It helped us figure out that we were all on the same page in terms of our goals — that we weren’t there to get on a podium, but to push ourselves, explore, see new places.
Ryan’s so strong, I was worried about his pacing: if he’d go out too fast, and if he’d let us help if he was struggling. But he was a great teammate, took the pacing seriously, and had no ego. One night he said he was “struggling,” but honestly, none of us could tell.

Rea was worried about getting emotional under stress because she’s never done one of these. We told her we were all going to want to cry at some point!  She just got stronger and stronger towards the end.
It was great working with professional athletes. They have such a deep reservoir of resilience from all those training hours. And they’re so strong mentally.  We all just focus on moving forward as fast as we could no matter what.

Heads down, no conflict, doesn’t sound like riveting tv, but a great race strategy. Was your team vibe the secret to success?
Well maybe, but to be honest, so much of adventure racing is luck. Here’s an example. In the first section of the race, there was an opportunity to sleep before a paddle in a tidal river. We considered sleeping there but then didn’t. Team VidaRaid (ranked #1 in one world ranking) chose to sleep — but while they slept, the tide changed. So while the earlier teams paddled with the river current, Vidaraid ended up paddling against the current as the tide flowed out. That put them so far behind.

Here’s one other example: we were getting lost on this trek full of ravines when I saw something moving ahead, and this lone cowboy type rides out in front of us. We asked him where to go, and he led us to the trail — I wouldn’t have gone that way! That’s what’s amazing and frustrating about racing — so much is luck.

You had so many memorable experiences. So are you going next year?
We were hoping they would let us in next year because of our finish this year – but we still had to apply!  Maybe we won’t get in!

Do you have any advice for the new Eco-Challenge hopefuls?
Big question! I think they’ll get thousands of applications.  They had a thousand last year and they only took 66. Seems as if they take a certain number of the best teams in the world from a variety of countries, and a certain number of “TV” teams with awesome backstories. So you either need to be a really good team, or you need a great story. That’s only my interpretation though.   But if you do think you have a chance: start planning now.  Start planning early. For travel, for training, for everything. There’s so much to think about. But it’s 100 per cent worth it.

Five muck-loving trail running shoes to get you out there this spring
Ontario Parks reservations up 100 per cent so far this year
The Barkley Marathons are a go for this spring
Stunning new short film sees world-class duo scale the tallest chimney in Europe
Chilly Half Marathon celebrates 25th edition with Chilly Chat featuring Reid Coolsaet
Earthquake hits town of Banff, Alberta
Calum Neff on his newly minted Canadian 50K record
A virtual run that celebrates the epic Great Lakes