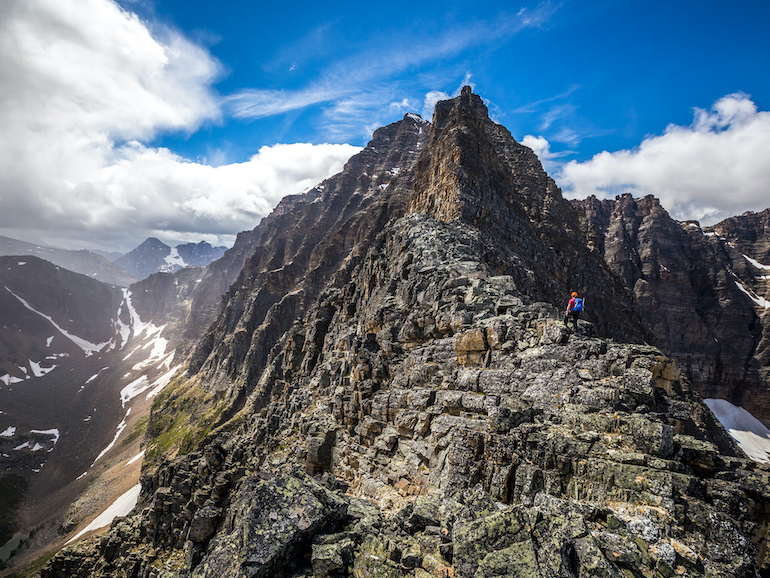 There are many virtual races out there, but few that push people to return to their beloved trails — think tall trees, winding paths, ocean views and open skies. But a new event from a trail running race series does just that and more. The new We Run The North: Canada's National Park 10K Virtual Series asks participants to celebrate the wonder of Canada's national parks in 2021 by virtually running, walking or hiking 10 kilometres for a park in each province.

“We are hoping that people want to take on a challenge to keep themselves accountable for their active well-being, to encourage their family and friends to join them and to share what they learn about our national parks too,” says Jodi McNeill, one of the co-founders and race directors of Gotta Run Racing.

McNeill says, the inspiration to organize the event came from the desire to keep people engaged and active while in-person events are unable to take place.

“We had to postpone all of our trail events in 2020 and we know how disappointing a year it was for everyone so the virtual option gives people a chance to stay active and share their goals and achievements through social media,” she adds.

Gotta Run Racing is the team behind popular Ontario trail running races including the Island Lake Classic and Chase the Coyote, which was first run back in 2012.

As trail lovers, McNeill says, the national park idea came to light during the pandemic when parks and access to local trails were closed.

“It became a real struggle to find ways to be active outdoors especially during the colder months when it's not as safe to be on roads and sidewalks. So when the trails and parks opened up again, there was a huge influx of visitors wanting to explore and escape their homes for a bit of reprieve,” she explains. “We are so lucky in Canada to have a fantastic variety of parks to explore.”

Participants in We Run The North, currently open for registration, can run for one province up to all 13 provinces and territories and will receive a race medal for each province, which connects. There are also bonus gifts for those who do more provinces including items such as magnets, neck gaiters and toques.

“We have wanted to create a medal that connects to another medal for years now and we were excited to have come up with this design with our new digital designer, Alison Grant, who is a runner herself and works for Maple Leaf Sports and Entertainment,” McNeill says. “She came up with the maple leaf design that fits into any other medal in the series. We also are excited about our bib which looks like the licence plate of each province and territory. We hope that our participants will be proud to show them off!”

Sweet toque and medals from We Run The North

Once the medals are shipped and people start logging their runs, McNeill expects a flurry of social media activity, which will add to the sense of community and national pride the race series is promoting.

To that end, each month, Gotta Run Racing will be sharing facts and photos with participants about each national park being featured so that they experience it virtually, for now, and hopefully in person as soon as possible, from Pacific Rim and Banff national parks in the west to Kluane in the Yukon, Cape Breton Highlands in the east and everything in-between.

The team is hoping to inspire not only Canadians but others around the world since our stunning national parks already attract visitors from across Europe and the United States.

“That's the beauty of virtuals, you can reach a much broader audience,” McNeill says. “We have had participants in our other events from Europe and the US and hope to attract even more with We Run the North: Canada's National Park 10K Virtual Series so that they too can experience the beauty of our parks and hopefully, plan to visit them in person one day!”

Interest in the event is on the rise, and most participants are opting for the challenge of running for all 13 provinces and territories, which is great news to McNeill. It means people are feeling good and recognizing the importance of setting goals and keeping involved in the greater trail running community. And, making a list of all the great  national parks to hit once the pandemic is over is pretty sweet, too.

“We are very thankful that our participants are adopting the virtual idea as it will help us to remain viable in order to be able to return to physical events,” McNeill says.

“At this point, no one knows when our current situation will settle down and we can resume large outdoor gatherings. In the meantime, we know that physical activity is absolutely key in keeping your mental health in check. Plus the best way to stay in shape is to keep moving, once you stop, it's that much harder to get going again. Not to mention, our swag items are pretty sweet!"

Be sure to support Gotta Run Racing and get your pride on for our incredible national parks with We Run The North: Canada's National Park 10K Virtual Series. Register here.

Ontario Parks reservations up 100 per cent so far this year
Stunning new short film sees world-class duo scale the tallest chimney in Europe
Five muck-loving trail running shoes to get you out there this spring
A virtual run that celebrates the epic Great Lakes
Calum Neff on his newly minted Canadian 50K record
Chilly Half Marathon celebrates 25th edition with Chilly Chat featuring Reid Coolsaet
Earthquake hits town of Banff, Alberta
The Barkley Marathons are a go for this spring