How to start trail running

With help from Deanne McDoom and Jeff Rowthorn

The popularity of trail running is increasing and for good reason. It’s revitalizing to be exercising outdoors minus the sounds of traffic and day-to-day life. On the trails, you’ll find fresh air, birdsong, and spectacular colour, not to mention a terrain that is more forgiving on the body than asphalt.

It’s a great workout for the legs and the upper body and it requires concentration and attention. It doesn’t require mountains, or a specific type of environment, only that the runner is in nature. And that’s pretty fantastic.

Looking for a perfect pandemic-inspired pastime, there is no better time to start trail running than right now.

Deanne McDoom (pictured above) is an avid and passionate trail runner based in North Vancouver, BC, and originally from the Toronto area. She’s also a gear reviewer for Get Out There and an ambassador with Salomon Canada.

McDoom was introduced to trail running following her fulfilling her lifelong dream of running the Boston Marathon.

“I started craving something new. A friend in Ontario was offering a trail running clinic so I signed up.  It was held at the Rattlesnake Point Conservation area in June 2013,” McDoom says. “Well dang was that day ever a life-changer! I felt like a kid in a candy store, running up and down trails, amid nature, sunshine, and pouring rain, with mud flying everywhere!  What an incredible eye-opening day that was.”

The next week she ran and volunteered at her first trail race at a Five Peaks event back at Rattlesnake Point, and started trail running weekly with the Salomon Toronto crew. Like so many before her, McDoom was hooked on trail running bliss.

She has competed in a slew of trail and ultra races including many appearances at the Golden Ultra and the Squamish 50.

To get started, one simply needs to find some trails and put a foot to the trail. But McDoom has a few other words of wisdom:

“Embrace getting dirty!” she says. “Respect the hills and know that sometimes power hiking up a hill can be more efficient than running up a big climb.”

Rugged terrain and climbs are part of the sport. It’s more than just running. So be prepared.

Salomon Canada suggests that “during the ascents, you alternate walking and running. You sometimes use poles or push on your legs with your arms in the steeper section. During descents, you have to watch your footholds, landing on the forefoot to cushion the impact. You use your arms a lot for balance. Embrace the slope, run easy and have fun with the terrain!”

And finding that perfect terrain is part of the fun. 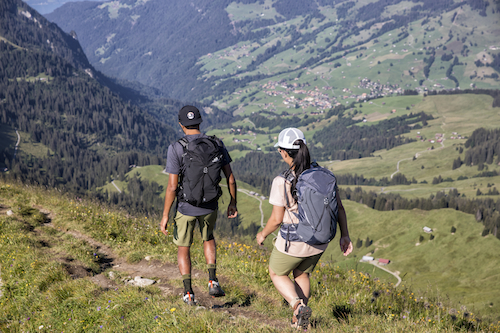 Jeff Rowthorn is a well-known Ontario runner and race director for Happy Trails Racing. He has quite the eye for trail running locations,  reflected in the popularity of his events in Southern Ontario. So, he’s a pretty good person to ask about finding good locations to begin trail running.

“There are a few boxes that need to be checked for me to consider a trail to be ideal.  My favourite trails are scenic ones with towering trees and lush vegetation.  I prefer trails that have a lot of winding single-track (narrow) dirt trails with some different options so that I can make my run shorter or longer, depending on how I am feeling,” he says. “I like trails that have technical sections with rocks and roots to keep me focused.  I also look for trails that have a lot of elevation change because steep hills give me a reason to walk and look around. Finally, I love trails that have creek crossings and bridges. The opportunity to see wildlife or a waterfall definitely earns some bonus points.”

For McDoom, she loves her local trails in North Vancouver, B.C. as well as nearby Squamish, and Tumbler Ridge.

When asked what’s top of mind when it comes to putting new trail runners on the right, ahem, path, Rowthorn says that personal safety is something to always be thinking about.

“It is really important to be aware of your surroundings and have a plan in place if something goes wrong. For example, a twisted ankle can mean that you are in the woods for a really long time,” he says. “Be aware of the access points, don’t take unnecessary risks, and plan for the worst.  New runners should not explore trails alone and should start in areas where there is cell reception so they can call for help if needed but also so that they can access a map if they get lost.”

McDoom also suggests that runners expect the unexpected and pack extra gear and supplies like water, food, a charged phone, and a rain jacket.

For those just starting out, a comfortable pair of shoes are really the only key piece of gear to consider. Trail running shoes offer a lot more features than traditional running shoes including greater attention paid to treads to provide traction in varying terrain as well as foot protection such as toe guards. Yes, roots and rocks can be painful.

Here is a good video from Salomon on choosing trail running shoes:

Rowthorn says, when routes get longer and more difficult, it’s time to think about additional gear.

“For longer and more difficult endeavours I really like having a GPS watch, a hydration pack with plenty of storage, collapsable poles, sunscreen, and anti-chafing cream,” he says. “For most of the gear listed, there are a lot of different options depending on both budget and personal preference.  Remember that comfort should always take precedence over style.”

Rowthorn says, there is much to like about trail running including the great all-body workout and decreased wear and tear when compared to road running.

“First of all, the trail surface is a lot more forgiving than pavement. Second, the pace is slower and more varied on a trail,” he says. “There will be portions of a trail that I run very hard and other portions that I am forced to ease up my pace, which allows me to recover a little. Third, my stride changes more during a trail run and I utilize a wider variety of muscles. Climbing up a steep hill, running down a mountain, and jumping over a fallen tree all use different muscles. As a result, after a trail race, my body is generally a bit sore all over rather than the very specific and isolated muscle pain I feel after a long road race.”

McDoom adds to get the most out of trail running it is important to add some strength training to weekly routines to stop bad patterns from developing.

“Simple lower leg exercises that help with lower leg strength and stability can go a long way as well as having a strong core,” McDoom says.

When ready, it could be time to sign up for your own first race and embrace that unique culture that pervades trail running. It’s something that keeps McDoom coming back time and time again.

“There is a special camaraderie within this sport layered with a laid back, supportive, and fun vibe that I truly enjoy,” she says. “Also, I love that trail running allows me to go deep into nature to explore amazing places and challenges me on all sorts of varying terrain. It never gets boring!”