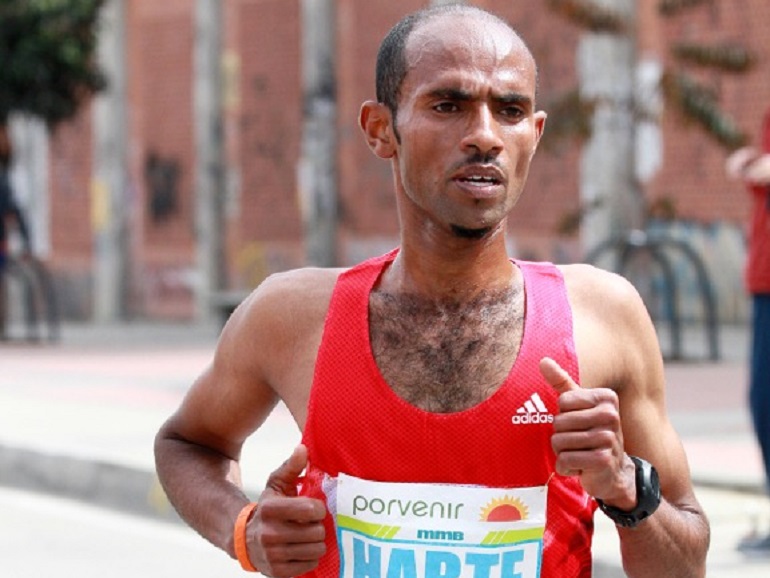 It may have taken an inordinate amount of time and patience to secure his visa, but Eritrean distance running prodigy Abraham Habte will be running in this year’s Scotiabank Toronto Waterfront Marathon.

The 20 year old is one of the most exciting talents to emerge from East Africa and his official marathon debut in the October 16th IAAF Gold Label race is eagerly anticipated.

A year ago he finished 6th in the IAAF World Cross Country Championships before recording an impressive 10,000m time of 27:53.38 at the 2016 Payton Jordan Invitational. Now he has marathon dreams.

“I want my debut marathon to be under 2:10 and I am hoping to get down close to the Eritrean national record of 2:07:27,” Habte declares with confidence.

Habte was training in a camp near Bogota, Colombia organized by his management team, when he applied for a Canadian visa. Ostensibly he had gone to Bogota to run the Bogota Half Marathon which is also an IAAF Gold Label race. He finished 5th there. After a lengthy wait his application was initially denied and so his manager called race director Alan Brookes for help. Brookes, in turn placed a call to former Canadian Olympic marathoner, Peter Fonseca, who is now the Member of Parliament for Mississauga East - Cooksville.

“The outcome was that they seemed to think I should not have been denied,” Habte remembers. “So the advice was to apply again, which we did. This time the process proceeded at about the advised pace and a week later I received the good news that I was approved. Five days later I received the stamp and my passport back.”

The delay meant Habte stayed in Colombia an extra month, which it turns out, wasn't so bad since the location is at high altitude and he had some good training partners to push him.

“I went to a small city called Paipa that is about two hours drive from Bogota,” Habte says. “I stayed in a very nice training camp organized by a former Colombian marathon runner, Jacinto Lopez, and his wife.  At times they have foreigners from elsewhere in South America, and from Europe, staying there.”

It is not the first time Habte, nor his fellow Eritreans, have encountered overly cautious immigration services.

“Visas are often difficult for us Eritrean athletes,” he explains. “It is not unusual to miss races because visas are denied or take too long.  Three years ago I missed going to the IAAF World Cross Country Championships because my visa was denied, along with about fifty per cent of the selected team.  So while I did not expect to have to stay in Colombia so long, it was not a complete surprise.”

Although the Scotiabank Toronto Waterfront Marathon is his ‘official’ debut, it will not be the first time he has completed a marathon. A glance at the IAAF world rankings shows him having run 2:15:59 at the Xiamen Marathon in China back in January of this year.

“I was in China to pace two marathons, Danzhou in mid December and Xiamen in very early January,” he explains. “In Xiamen I was hired as a pacemaker but felt so good at 30K that I decided to keep going and try for the win.”

Finishing the race caused a bit of concern for his manager, Derek Froude, who had not wanted him to run a marathon at such a young age. The New Zealander has been working with Eritrean runners now for three years and wanted to proceed cautiously with Habte.

“I was a bit distraught when I saw he had finished the marathon at 19 years of age,” Froude confirms. “To my considerable surprise I guess he discovered the lead group was fairly small at the point his pace making role was over and he decided to finish. He crossed the line 9th and earned some prize money.”

At present Habte lives with a group of ten other promising runners on the outskirts of Asmara, the Eritrean capital. The house is rented by Froude, who is now a certified agent for the Eritrean Athletics Federation. Located at roughly 2,400 metres above sea level, it is an ideal place for distance runners to train and accordingly Habte reports that he is in fine shape.

Like most Eritreans he has followed the successful exploits of Zersenay Tadese, the four time world half marathon champion and 2004 Olympic 10000m bronze medalist.

“The success of Zersenay Tadese was probably the one thing that influenced me the most to start running,” Habte admits.  “My coach Berhe Asgedom convinced me that I could follow in Zersenay's footsteps. As I have mentioned, he was probably one of the biggest influences in my decision to become a runner and dedicate my life to achieving success as a distance runner.”

With his attention turned to Toronto he is approaching the race with the pragmatic attitude of a veteran.

“I do not know a lot about the race, but I do know that they often run times at the level I am hoping to run,” he allows.

With Kenyans Ishhimael Chemtan and Gilbert Kirwa plus three time Canadian Olympian, Eric Gillis, amongst the elite entries, he will have company. The lineup has the makings of a classic marathon contest.