Five night runs to check out this fall 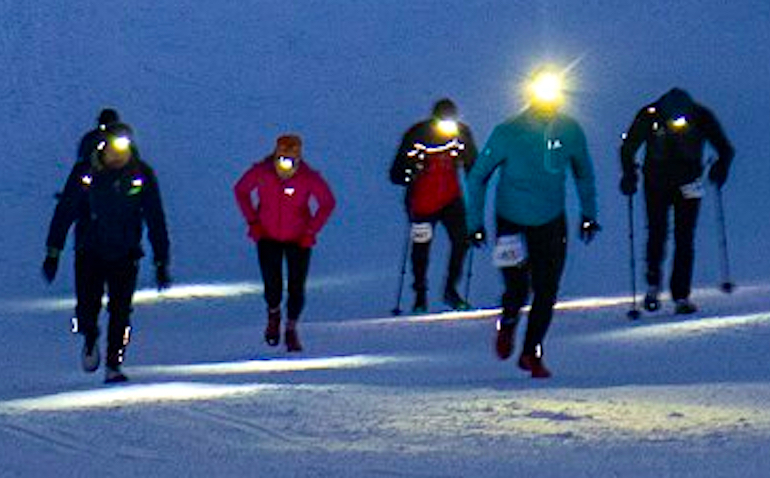 Stumbling out of bed first thing in the morning and into running shoes just isn’t everyone’s idea of a good time. Night owls have certainly benefited from the growth of races that get underway in the event, and the trend is showing no signs of slowing down.

Night runs are becoming more popular because many runners are looking for a unique experience in which they can test their limits in a new situation, says Jeff Rowthorn, a veteran runner and the founder of Happy Trails Racing.

Certainly, some precautions are in order, especially if said night race is on the trails, over roots, fallen branches and nocturnal creatures.

Here are five evening races happening on the asphalt and in the woods this fall.

Midnight Moose Ultra
Sept. 20-22, Gatineau, Quebec
The Midnight Moose Ultra is the season finale for the 3 Beavers Racing series. This night-time ultra-trail race offers up distances of 25km, 50km, 100km and 160km across some of the toughest and pretty fantastic trails in the lovely Gatineau Park, Quebec. Using only headlamps and the light of the moon, participants of all four races set out from Camp Fortune and are challenged to complete the race before sun-rise (for the 50km race), sun-set (for the 100km race) and a second sunrise for the 160km. The fine folks from 3 Beavers offer food and drink for all hungry finishers no matter when they arrive!

Starlight Runway Run
Oct. 5, Yarmouth, Nova Scotia
This sounds like an unforgettable night-running experience that sees participants running under the stars and across a runway illuminated by airport lighting. A very unique and dramatic experience with a light show not soon forgotten. This is a family-friendly event with cool custom medals for all participants.

Banff Winterstart 5 Miler Night Run
Nov. 2, Banff, Alberta
The Banff Winterstart 5 Miler Night Run starts in the wonderfully scenic town of Banff, Alberta at the stroke of 7 p.m. in front of the Banff Caribou Lodge & Spa. The out and back course travels along Banff Avenue and Tunnel Mountain Road.  Once beyond town limits, there are no lights, so glow sticks will be passed out to carry along the course. This event has a reputation for some seriously bright and brilliant fashion statements. It’s kind of a big deal. Join the other runners at the official afterparty at Wild Bill's following the run.

Las Vegas Rock ‘n’ Roll Marathon
Nov. 16-17, Las Vegas, Nevada
Sure, Rock ‘n’ Roll Marathons are generally a daytime event, but this is Vegas, and the real fun doesn’t begin until the evening. One good thing, with all the flashing neon lights, headlamps are unnecessary. Race options include a full and half-marathon as well as a 10K and a 5K. As this is Vegas, expect a serious after-party with live entertainment and much more.

Night Nation Run
Toronto, Vancouver and locations across the United States
If you’ve ever gone for a run where the music blasting through your earbuds made you want to dance-run instead of run-run, the Night Nation Run is your chance to make it happen without getting strange looks from others on the road. The Night Nation Run is billed as “the world’s first running music festival” where live DJs are set up along the course and a finish line after-party. After the race, you can dance the night away to top DJs and special guest celebrity performers. Night Nation runs are scheduled to take place in Vancouver in August and Montréal in September.