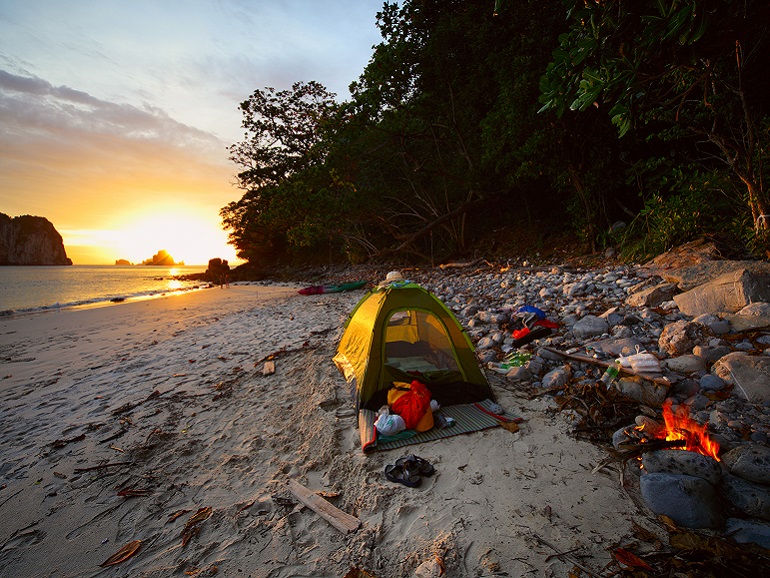 Sure, a campsite close to the ocean or a lake is ideal for easy access to swimming, boating and fishing during the day—but have you ever pitched a tent right on the beach, watched the sun sink below the horizon and fallen asleep to the sound of lapping waves at night?

If getting lulled to sleep by rolling ocean waves is an experience you’d love to have, head to one of these five spectacular beaches where camping in the sand (or at least very close to water) is permitted.

Long Beach (Pacific Rim National Park, BC)
Spend the day surfing at Long Beach before hunkering down and watching the sunset over the waves of the wild west coast of Vancouver Island at the Green Point Campground in Pacific Rim National Park, BC. Located on the shores of Long Beach, Green Point Campground offers 94 drive-in and 20 walk-in sites right on the beach for overnight campers, as well as hot showers, potable water and electricity.

Beausoleil Island (Georgian Bay Islands National Park, ON)
Just a couple of hours north of Toronto is Georgian Bay Islands National Park, the world’s largest freshwater archipelago and the perfect spot to escape the city and camp out next to the sea under the stars. Board the passenger ferry to Beausoleil Island and find a quiet spot at one of the secluded backcountry campsites overlooking the water.

Flowerpot Island (Fathom Five National Marine Park, ON)
Instead of heading home after a day spent checking out the ancient rock formations, grassy cliff-edge forests and shipwrecks while you kayak or boat around Flowerpot Island in Fathom Five National Marine Park on Lake Huron, why not camp overnight at one of the island’s six backcountry campsites? The wooden platform sites are a short walk from Beachy Cove, the main dock on the island, and are right near the water so you can fall asleep to the sounds of Georgian Bay lapping at the shoreline.

Mystic Beach (Juan De Fuca Provincial Park, BC)
Mystic Beach, located about foiur kilometres in along the 47-kilometre Juan de Fuca Marine Trail from the China Beach trailhead in Juan de Fuca Provincial Park, is well worth the 45-minute hike with your camping gear in tow. A white, sandy west coast beach awaits, complete with roaring surfing, a walk-through rock arch, rope swing, waterfall and bear-proof food storage containers. You can camp right on the beach for just $10 per person a night with a backcountry camping pass, which can be purchased in the trailhead parking lot or ahead of time online.

Fishing Cove (Cape Breton Highlands National Park, NS)
A grassy hillside next to a stunning cobblestone beach and river is the perfect spot to pitch your tent for an overnight backcountry camping adventure in Cape Breton Highlands National Park. The Fishing Cove backcountry camping area, located at the base of MacKenzie Mountain, is an 8 kilometre hike down to the rugged coastline, so be sure to bring camping gear that’s easy to carry. No open fires are allowed, so you’ll need to bring an easy-to-carry camping stove if you plan to cook anything.

What you need to know to start ultralight backpacking this spring
What you need to know to start camping this spring
Secret Spots: New Brunswick trail runner Blair Mann's faves
Toronto area runner Elias Kibreab sets new FKT on Ontario's Bruce Trail
Now could be the best time to plan that cross-country cycling tour
Five places you can camp right on the beach in Canada
An epic 500K gravel biking challenge in the beautiful Eastern Townships of Quebec
An epic new cycling event from the team behind BC Bike Race