Can you ice canoe? 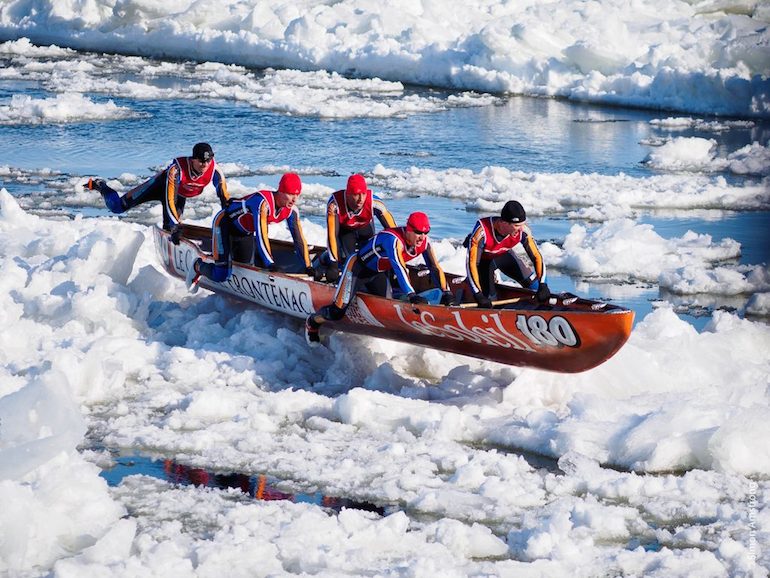 We are standing outside a nondescript, nearly empty government building in Quebec City below the Plains of Abraham on the banks of the Saint Lawrence River on a brisk -20-degree Sunday morning to learn the not-so-popular but fascinating and fun sport of ice canoeing. Dressed in layer upon layer of sweat-wicking winter athletic apparel, hockey shin pads, thick neoprene socks, thick neoprene boots and homemade spikes of moulded plastic with inches-long bolts piercing the bottom, the hardy few on hand are reminiscent of a group of movie extras filming a Canadian version of Mad Max.

The mood is upbeat as we duct tape our plastic, spiky things to our neoprene boots before heading outdoors to begin a short lesson. Everything is fine until the demonstration. Here, we learn 'the move.'

The move in question is the one that takes the canoeist from rowing position to what we have, thanks to an ever-so-slight language barrier, come to refer to as the "scooter" position. One leg inside the boat, and one leg outside propelling the boat over ice floes on the river via, well, scooting. The move involves edging along the wall of the canoe on one's knees while dangling over the icy waters of a massive, quickly moving Saint Lawrence before dropping back into position.

Nobody says anything. It's more of a laugh, and a collective sigh that translates roughly as "You're kidding, right?"

Ice Canoeing is a 'thing' in Quebec City. It dates back to the beginning of New France in the 1600s, and currently involves five-person crews racing through the river and clamouring over chunks of ice the size of a modest bungalow. And this fabled river is pretty much the only place in the world that this 'thing' happens with anything approaching regularity due to the unique conditions on the river.

The Quebec Winter Carnival always holds a major competition during the two-week festival. Rumour has it that the races started after some locals indulged in a few too many "caribou" drinks — the warm fortified wine that runs like water during the two-week party. But since such humble beginnings the races have become one of the most popular events, and has propelled the sport to even greater heights that include a full-fledged competition circuit with numerous teams filled with serious athletes who generally compete during summer months as whitewater canoe and kayak specialists or cyclists.

These guys make "the move" look as easy as putting one foot in front of the other as they spin their bodies quickly from paddling position to scooting position and back again. This does not fill the group with confidence. So we practise. And we practise some more until we start to get cold and decide with a shrug of the shoulders and some non-committal grunts that we are ready to proceed.

Team leaders are perched at the front and rear of the boat with the participants in the middle three seats. Positions two and four require simply turning around in the boat to get from paddling to pushing position. The one person in the third position, is the only one that needs to execute "the move." That is me. And I am not amused. But prep time is at an end, and we start to manoeuvre the massive boat towards the icy waters.

After a short session pushing the canoe along the flat, snowy and peaceful flatlands between our home base and the river, the crew arrives at the jagged and ever-so-icy shoreline. We pause the reflect on all that we've accomplished thus far. Nothing.

A burst of adrenaline, a gulp of icy air and we push the boat up and over the first in a series of hills, clumps, cracks and crevasses before the water. The booming sound is more than a little rattling once we realize that what we're hearing is the sound of the ice cracking between our feet. And then, just like that, the front of the boat finds the water and the first two crew members are back inside and putting their oars into place. It's time for the move. And, although clumsy, perhaps a little sloth-like, somehow I get myself turned around and into rowing position.

The boat is not paddled, it is rowed, with large oars that have a large spike on one side to grip the ice.

The key to ice canoeing, as with most team sports, is to coordinate the efforts of each participant. This is obvious as we are a mess and getting nowhere fast until one of the guides start calling out a stroke count and we get some semblance of synchronicity in our movements. Another important part of the sport is momentum. If the boat is slowed or stopped while going over the ice, it is not good. We figured this one out the hard way. It is also very hard. There is the obvious cardio component, but it is also a great full-body workout. One minute the rowing is working the upper body and the core. The next, it is the scooting the puts the burn into the quads. It is no wonder cyclists make such good ice canoeists. They have the legs for it.

After 30 minutes and a number of successful moves and one that lands me posterior-first in the bottom of the boat, we land on a rather large chunk of ice and take a coffee break, basking in our athletic glory. It's quite the unique view of Old Quebec City, from the middle of an icy river. And one that few people have the opportunity to enjoy. Sigh. Three short minutes later, the current has carried us back to where we started. Stupid river.

During the second half of the expedition, we find our rhyme as best we can, and it makes a big difference. We tackle a few ice floes, and generally run roughshod over the Saint Lawrence before we arrive back to our beloved flatlands and drop our keisters on the snow — exhausted but thrilled by the incredible adventure.

There are many opportunities to sample ice canoeing in Quebec City. Be brave and get out there.