Mathea Olin is the future of Canadian surfing 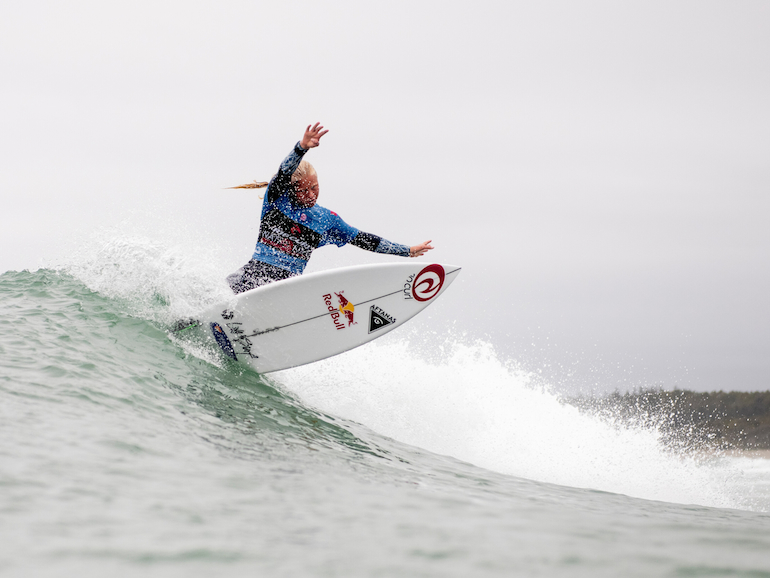 Mathea Olin grew up playing in and around the ocean near her home in Tofino, British Columbia. While others across the country had a hockey stick plunked into their snow-covered mitts before they were old enough to walk, Olin was given a boogie board. At eight, she learned to surf, now 16, she is already one of the best in the country and on track to represent Canada at the 2020 Olympic Games in Tokyo.

“When I got into surfing, I just loved it,” she says, on the phone from her Tofino home. “And it just made me want to keep doing it. And then I did a few comps and that was fun too.”

Eight years ago, the natural paradise on the west coast of Vancouver Island was still coming into its own as a surf capital. When Olin would head out to practice, she was often the only one in the water. Now, not so much. But unique to Tofino, Olin is often surrounded by other women out shredding.

“In Tofino, there is usually an equal number of men and women in the water now,” says Olin. “Parents and mothers are out there completely ripping. And Tofino being such cold water, it’s a unique way of surfing and it takes more commitment, so it’s great to see so many women getting out there.”

A few weeks ago, her town hosted the Canadian Rip Curl Nationals surfing competition presented by Red Bull. The results of the competition would decide who would make Canada’s Olympic trial team. Olin defended her U16 title, was second U18 and fourth overall to secure her spot and take another step on the road to the 2020 Olympics.

Joining her for the ride on the women’s side are her sister Sanoa, California surfer Bethany Zelasko who won the competition, and big wave champion Paige Alms, who was second. 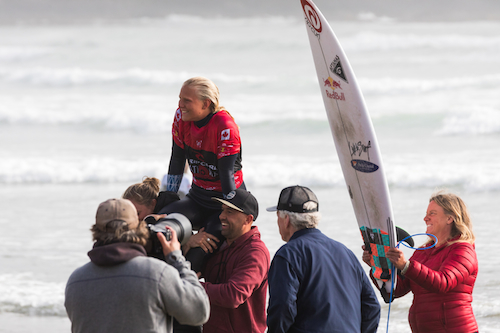 Although Alms lives in Hawaii having left Vancouver Island when she was just seven years old and has been surfing professionally for many years, she and Olin have struck up a close friendship. Alms even stayed at the Olin residence while competing at Nationals.

“I think I first met her about a year ago, been on a few different trips between then and now,” says Olin. “We have this insanely incredible relationship and she’s literally one of my best friends right now.”

Alms and Olin even recently travelled to Haida Gwaii on the northern coast of British Columbia as part of the soon-to-be-released Red Bull Canada film Northern Tides.

In the film, Olin and Alms explore breaks that have never before been surfed by women, but also explore the history and culture of the Indigenous community.

“The surfing was incredible,” she says. “But we also got to learn so much about the Haida Gwaii history and felt even more connected to the BC coastline that I love.”

Olin was actually born in Canmore, Alberta, and the family moved to Tofino to be closer to the natural oceanic paradise of Clayoquot Sound that was enthralled visitors for generations. A quarter-century ago, it was the epicentre of a battle over logging old-growth temperate rainforests, and there were far more hippie nature lovers than surfers back in those days. Now, it is considered one of the top surf towns in North America.

When Olin was coming up as a young grommet, there were a few prominent locals who drove the scene, the Bruhwiler family and Peter Devries, easily the country’s most successful surfer up to now, to name just two.

From the Bruhwiler clan, she learned more about the ocean on boat trips up the coast in search of surf breaks when, for example, one of the family would snatch a fish or sea creature fresh out of the ocean for beachside sushi. Devries, well, Olin studied his every move. 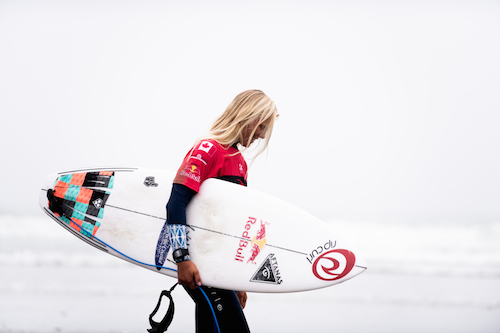 “Pete is one of the best surfers in Canada for sure, and I grew up getting to watch him surf,” she says. “I memorized every movement. He’s one of my biggest inspirations, for sure.”

At home, Olin can usually be found surfing at Cox Bay, which she considers the areas best and most consistent break. She’s 16, so she is still knee deep into high school, which she is completing online so she can be available for trips for competitions around the world and gets adequate training in during the day — she surfs once or twice every day.

When she’s not surfing or schooling, she still enjoys ballet and gymnastics but can usually be found with friends or family exploring nature.

“Anything I get to do out in nature with close ones, that’s how I spend my life and having lots of fun,” she says.

Olin’s Olympic dreams are far from a lock, but she can take another step towards her goal in the coming year by competing at the Pan Am Games in Peru followed by the World Championships in Japan.

Although surfing in Canada has come a long way, when Olin competes internationally, news of the country from which she hails is usually still greeted by bemusement.

“They’re still always surprised, they’re like what, I had no clue you could surf in Canada,” she says. “But I love it.”

Backpacking Canada: 10 multi-day hikes for your bucket list
Canmore's favourite running event set to return this September
How to start mountain biking this summer
First-ever Canadian Mountain & Trail Running Championship is coming this September
Top 10 backcountry camp experiences in Canada
Where to kayak the biggest and best river waves in the world
7 breathtaking natural wonders in Canada to explore this summer
With campgrounds overrun it might be time to look into free crown land camping