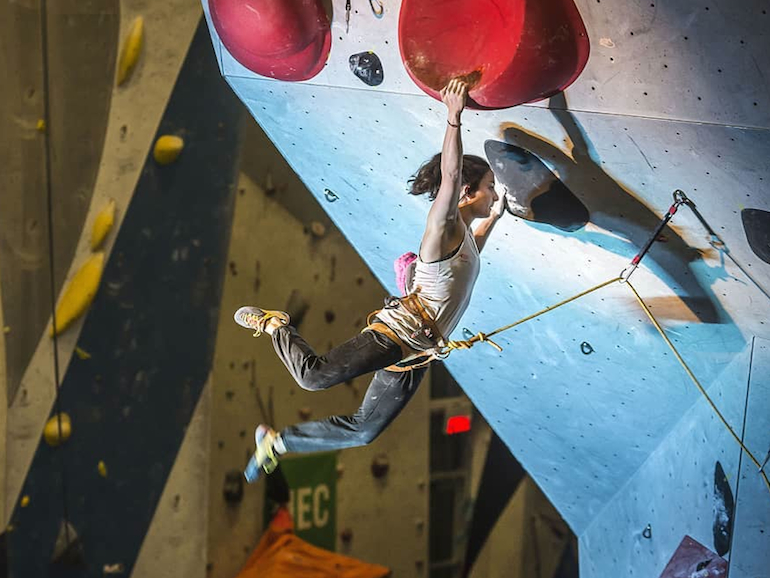 Get Out There's Becca Frangos gives us an inside look

Canadian Lead Nationals 2019 is a three-day event hosted at Allez Up, a climbing gym in Montreal. Here, the strongest climbers in our nation were battling it out for the Canadian title. With a strong start in the qualification round and a consistent performance throughout the competition, I was pleased to come away with a second place finish in a stacked women’s field. Sounds almost perfect, doesn’t it? From an outsider's perspective perhaps.

Spectators see the medals, the smiles and the tears of joy when dreams become reality. What they don’t see is the countless hours spent in the gym pushing ourselves further and further for the possibility of success. Nobody sees the self-doubt, or the anxiety of underperforming and certainly not the crushing pain of a disappointing performance after so much effort was put in.

Competitive climbing is a high-pressure sport.

In the discipline of lead climbing, you have only one chance to climb as high as possible on the given route. Going into the Lead National events in previous seasons I was physically prepared yet I did not achieve the results I was aiming for or knew I could produce. So what made 2019 different? Mental preparation.

Before the 2019 season, I never fully understood or really acknowledged how much the mental aspect of my performance was affecting me. I would see a move low down on the climb that seemed committing or uncomfortable and I would second guess every decision the entire climb. I felt like this was a way to play it safe, so a low fall would be prevented, but in fact, this mentality was doing nothing but holding me back. This thought process let the climb control me rather than me it. I wasn’t even giving myself the chance to succeed.

Along with this self-doubt, I also felt a lot of pressure from those around me — like people expected a certain calibre of performance from a competitor at my level. In 2015, when I was only 17, I became the adult Lead National champion and well as the Youth National Champion in both bouldering and lead climbing. The 2015 season put me on the map rather quickly; I was no longer that dark horse nobody was expecting anything of and this most definitely held a place in the back of my mind. I was so focused elements of the competition that I could not control, what others thought and was often fixated on the end result rather than the process to get there, that I didn’t realize that the only thing holding me back was really myself and the success I felt like I deserved.

This season, with these realizations, I shifted my focus to optimize my mental performance in preparation for the competitions that lay ahead. In January, I started seeing a sports psychologist who gave me some valuable tools to implement into my training regime. 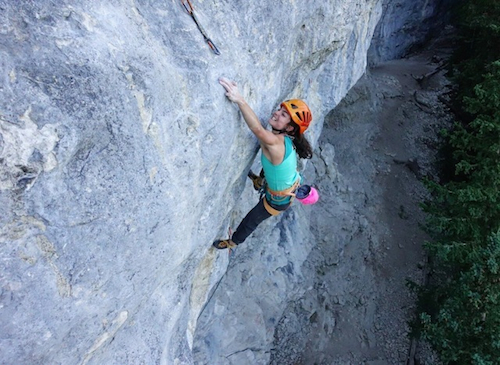 At first, I found it really difficult to adjust my mentality but after consistent practice, it became just another part of my everyday routine.

One of the exercises I do in training and when I compete is before I get on a route I think of the same three words before getting on the wall. For me, those are 'strong, confident and decisive,' which to me are the three things I want to feel when I am on the wall. This allows me to focus on myself rather than the environment and things I can’t control. When I am actively climbing I am evaluating how I am going to get to the next hold and ultimately the top of the route, I often don’t hear cheering or the music playing in the background because I am so focused on what I am doing.

In the lead up to Nationals, my physical training remained relatively unchanged. I stuck to my routine just like any other of the 330 days I train throughout the year. But this time, I walked into the event with my head held higher, confident, trusting in myself that I had done everything in my capacity to prepare and that ultimately no matter the outcome, if I gave 100 per cent effort every time I stepped on the wall that everything would be okay.

The biggest change over this past year has been my decisiveness and confidence in my climbing. Now if I encounter as section of a climb I am unsure of or a committing move I make a choice as to how I want to proceed and go for it without a second thought. This allows me to conserve energy and gives me a higher chance at actually doing the move rather than half committing to a move after flip-flopping between different methods and most likely falling off because of that.

At Lead Nationals, I was both honoured and happy to share the podium with Allison Vest and Indiana Chapman who both had great performances all weekend. I would be lying if I said I didn’t want to win and I was a wee bit disappointed that I didn’t make that happen with my finals climb but overall I climbed consistently well the entire weekend across all rounds and climbing the finals route was possibly the most fun I’ve had at a competition ever. So I’d say the second place was just the cherry on top of the sundae.

Soon, I will be heading to Calgary for National Team selection camp and if that goes well the plan is to head to Europe for the end of June to train and compete at a few Lead & Speed World Cups in France in July. Depending on how I perform at those World Cup events in Europe will determine if I am able to compete at more events later in the summer such as the World Championships in Japan as well as more World Cups in the fall so we will have to wait and see!!

Later in the summer in August I am also planning on doing some outdoor climbing. No big outdoor trips planned so mainly some local climbing on Vancouver Island, around the Bow Valley and in Squamish.

Talk to you soon!

UTMB officially cancelled for 2020
Our massive list of 25 (and counting) virtual races of all shapes, and sizes
St Thomas runner first to finish Great Race Across Tennessee ahead of 19,000 others
Adidas set to launch new Terry Fox collection to celebrate 40th anniversary
5 provincial parks in Southern Ontario now open and perfect for a trail run or hike
Now could be the best time to plan that cross-country cycling tour
The Golden Ultra has officially been cancelled for 2020
Federal government of Canada announces national parks will be reopening in June