The Pentathlon des Neiges de Québec is already a legend. The iconic winter multisport shindig draws participants from across the country and farther afield to Quebec City to join in the three-week festival of competition and fun on the historic Plains of Abraham. This year marks the inaugural Iceman Challenge, which triathlon organizers are hoping to position as a snowy northern alternative to Hawaii’s Ironman triathlon.

The Iceman Challenge triathlon will involve running, skating, and skiing and there are three versions offered in 2022. There will be a 10-km Sprint for individuals who want an introduction to multisport, as well as a 25-km Classic for those looking to push themselves a bit harder, and the 75-km Ultra, which is the ultimate endurance competition for athletes who want to take up a serious challenge against a considerable distance but also the cold and the wind. Teams are also accepted in the Ultra category.

Pentathlon director of communications Gilles Morneau said he hopes international competitors will gather in Quebec City for the Iceman Challenge, which is set to take place on Feb. 27.

“We want to give it international prominence. The Iceman Challenge is the winter counterpart to the famous summer Ironman Triathlon,” he says. “A real endurance event for the winter, which is 10K of running, 40K of skating, and 25K of cross-country skiing.”

According to Morneau, many Iceman Challenge registrations started rolling in as soon as the unique event was announced. 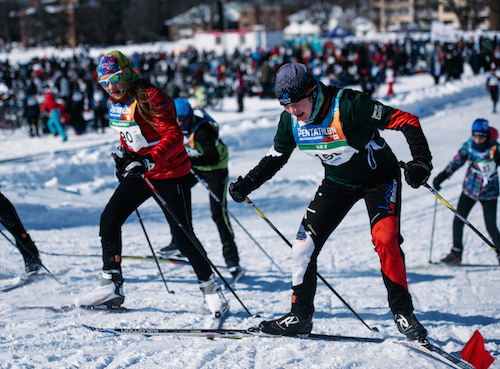 “It seems like the distance is not so extreme. In fact, all our solo events are more popular this year, probably a result of our virtual events from last year, where people realized that they were good enough to do a few sports in a row,” Morneau says. “They got bit by the multisport bug!”

Newly expanded for 2022, and scheduled for Feb. 26 to March 13, the Pentathlon des Neiges de Québec is the largest winter sports festival in the country with enough events and sports challenges to satisfy one and all.

In addition to the Iceman Challenge, there is the iconic Pentathlon, as well as corporate and family challenges, and a special week during school break when families will descend on the Plains of Abraham for fun-filled days of winter sports discovery.

And in exciting news, Morneau says that this year Alex Harvey was named as the news spokesperson for the Pentathlon des Neiges.

The iconic Canadian Olympic cross-country skier will be on hand for the Corporate Challenge, presented by BCF, the firm where Alex now works as a lawyer. He will also be on the starting line at the Iceman Challenge Classic in an invitation-only event reserved for teams of public personalities and renowned athletes. 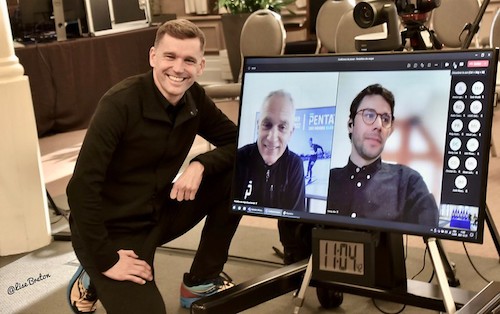 “This will be the first edition of this made-for-media event,” Morneau says. “With the help of Alex, who will invite friends from the World Cup circuit now retired, we want to make it bigger next year, culminating in an event in 2024 where we would have teams from a number of countries competing in a friendly format.”

In a recent press conference, Alex challenged the new mayor of Québec City Bruno Marchand to build a team to compete against his in the Iceman challenge. Marchand, being an avid runner and a Pentathlon regular, accepted the challenge and also asked Alex for the phone number of Johannes Klaebo (world champion cross-country skier) to complete his team!

For more information on this legendary event and how you can get in on the fun, go to the Pentathlon des Neiges de Québec website.