What you need to know to start river surfing

Sure, it would be great if we could all live by the ocean, but that’s just not how geography works. But, that doesn’t mean a life without surfing is a given. Not only is there surfing on the Great Lakes, but there is also river surfing, a growing activity that keeps the stoke alive across the country even in landlocked locations.

River surfing is different from traditional surfing because it is a static wave, such as you might see in freestyle whitewater kayaking.

River waves channel similar forces to ocean waves, in theory at least. It’s the same theories of speed, energy and tension, but applied on a much smaller scale, generally in a single location. Here, water pours over a unique area in a river, like a drop, where a wave forms and can be surfed by those in kayakers and, yes, surfboards, basically by balancing in one spot. It’s like a wave machine stuck in the middle of a river.

For more than a decade, Calgarian Jacob Kelly Quinlan has been at the forefront of the growth in river surfing in Canada and around the world. Not just surfing the river, but creating surfable river waves that bring a culture and sense of community all its own.

“Growing up in Western Canada, surfing couldn't have been any further from my mind. I played hockey in the winters and loved swimming in my summers,” says Quinlan. “I remember a few key moments when a film or magazine brought surfing into my life and I knew it was something I wanted. It wasn't until taking a year off university that I found myself in the ocean for the first time and absolutely loving it.”

Quinlan spent eight months in Australia and fell in love with surfing. And, before he knew it, he was back in Calgary hundreds of miles from the nearest ocean. But one might not realize it looking at Quinlan walking around campus with a longboard, flip flops and board shorts even with an inch of snow outside. He was that addicted. And before long, he found others suffering from a similar ailment.

“In the big picture, my river surfing started at about the same time as my ocean surf trips. Life was the stuff that happened in between my next surf trip,” Quinlan says. “River surfing was merely a way to keep my surfing legs strong and scratch the itch until I could sink my toes into the sand again.”

But, a funny thing happened to Quinlan every time he hit the beach in an exotic oceanic destination. He would miss family and friends and mountains and head back to Calgary. So, he knew what he had to do.

“Calgary is my home,” he says. “It's a wonderful feeling to do what you love where you call home rather than being a tourist somewhere else.”

Quinlan and a ragtag group of stoke seekers in Cowtown set about establishing their own surf community.

“River surfing in the early days was a trip. We were a ragtag group of guys with a whole world of ocean experience but very little knowledge of the river,” Quinlan says. “We were a united front. A family really. That or some kind of support group for surfers who found themselves stuck in the mountains.”

According to Quinlan, the wave time is the largest adjustment to make when moving from ocean to river surfing. In the ocean, a ride might be a few seconds long. On the river, the wave is just there and a one-minute ride is considered a quick on. As a result, the other thing to get used to is the lineup.

“Because the wave is always in the same spot we line up and take our turns. No matter if you're the Alberta champ or on your second day, we all wait our turn,” Quinlan says. “Not to mention, the people waiting and watching are so close to you, cheering you on.

Not to mention, there is a serious environment benefit to surfing at home instead of hopping on a plane to get to the ocean.

“All in all, I have peace of mind that I have greatly reduced my carbon footprint from flying from ocean break to ocean break and my general state of happiness is improved when I can make it out even just twice a month,” Quinlan says. “I am more able to focus at work and in my relationships rather than looking to book my next escape.”

A few years back, Quinlan achieved a personal goal he set for himself of surfing 100 river waves.
I'm so stoked to claim this honour after working on it for so long. I have really expanded my knowledge of rivers and made some great friends along the way,” he says. “I’m actually working on a film with filmmaker Nico Walz as a way to announce my big accomplishment.  The film will be out mid-summer!”

Quinlan says August is a great time to check out the wave in Calgary and he is also working on a kids surf camp.

“Our wave downtown is naturally formed and a great wave to learn on. Some of the typical dangers found at river waves are totally not a problem at this spot,” he says. “The City has been very receptive to the work the local River Surf Association is doing to improve the area and increase access. Everyone in the water is super welcoming and stoked to have newbies working on the vision together. You can find out more about our Calgary project here.”

Although the COVID-19 pandemic has changed most people’s travel plans, including Quinlan's, he is excited to dedicate more time to the development of the sport in Alberta.

“I spent a long time looking for the perfect river wave but I have come to realize that the perfect wave is one that feels like home. Now I spend my time working on ways to make the river more inviting to all people,” he says. “We are soon to see river surfing facilities popping up around the world that will change the way we think about surfing. I'm really excited.”

At last count, there are now more than 700 river surfers in Alberta, according to Quinlan. There is the annual Slam Festival, surf competitions, lessons, and equipment are redly available, there are safety resources and a vision for how to shape the future.

In addition to Calgary, Quinlan, through his Surf Anywhere project, helped establish the Mountain Wave in the Kananaskis. And another one of Surf Anywhere’s notable projects is a surf wave in Bend, Oregon.

For him, river surfing isn’t about replacing his love of surfing in the ocean, it’s about opening new doors and having new experiences in his home city.

“The wave we built in the Kananaskis is my favourite because it is a remarkable feeling to go from a surf-starved landlocked kid who's flying all over the world to do what I love to being able to surf any day of the week,” Quinlan says. “It makes me smile every time I'm there. When I run into someone down there who is having a bad day or blaming the wave for not being what they want I just need to remind them that it was not so long ago the spot in which they are standing was just a flat river with no chance of surfing.”

Calgary: Calgary’s 10th Street Wave is located beneath Louise Bridge in a deep-water channel. Harvie Passage south channel is described as a good beginner wave for those new to river surfing, but poorly designed with risks.

Kananaskis: The Santa Claus wave on the Lower Kananaskis River is an intermediate-level wave with medium risk. The Alberta River Surfing Association describes Santa Claus as a “good introduction to more aggressive rivers.  should be treated as such.  There are good eddies and deep water.” The better-known and riskier wave on the Kananaskis is the Mountain Wave located outside of Canmore, Alberta. It features shallow water, it’s glassy and it’s fast.

Ottawa: The Ottawa River is home to some of the most intense and awesome whitewater kayaking waves on the planet, so it’s no surprise that river surfing has become a popular pastime around the nation’s capital. One of the most popular waves in the city of Ottawa area is the Sewer Wave, which is on the Gatineau side of the river. There is a rope hook-up as surfers need a tow-in to catch the wave during high water. There are also a few different waves at Bates Island including Wall Wave, Back Wave, and Top Wave.

Montreal: Another popular sport for river surfing in Eastern Canada is Montreal. There are two well-known and significant river waves in the area. The easier of the two is La Vague à Guy, ideal for beginners. While downstream, Habitat 67 offers a much more significant challenge. 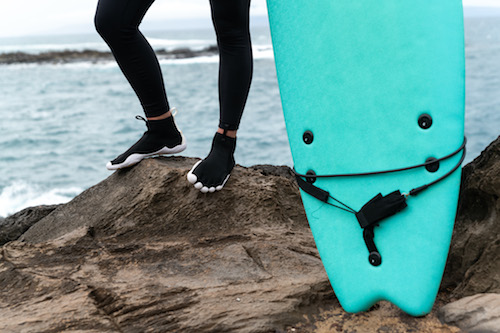 What gear is needed?

Surfboard: Short and lightweight boards are ideal for river surfing, and since there are so many rocks around make sure it’s something sturdy and durable, which can’t be damaged too easily.

Wetsuit: Yes, please. As is the nature of surfing in Canada in general, the best waves are usually accompanied by sub-optimal temperatures. A good wetsuit will keep you out there having fun longer.

Footwear: When navigating out in the river, foot protection can come in handy. An ideal shoe is the Vibram V-Neop, which is, essentially, a comfortable, functional neoprene upper combined with a grippy Vibram outsole. The 3mm minimalist outsole provides a good ground feel. The non-marking XS Trek performance rubber outsole is extremely versatile, with great traction on wet and dry surfaces. And that means it can pretty much handle anything you encounter in the water, or when the surfing is over and it’s time to head back to town for some more adventures.

A word about risks

Like any sport, there are risks. In river surfing, there are plenty of risks, most significantly because surfable waves often occur in or near shallow water and rocks. A fast-paced and challenging activity combined with an unforgiving environment is not a perfect marriage. So, be prepared and take the proper steps to educate yourself, and get the proper training, gear, and safety equipment.

Five places you can camp right on the beach in Canada
Now could be the best time to plan that cross-country cycling tour
Toronto area runner Elias Kibreab sets new FKT on Ontario's Bruce Trail
What you need to know to start camping this spring
An epic new cycling event from the team behind BC Bike Race
Secret Spots: New Brunswick trail runner Blair Mann's faves
What you need to know to start ultralight backpacking this spring
An epic 500K gravel biking challenge in the beautiful Eastern Townships of Quebec