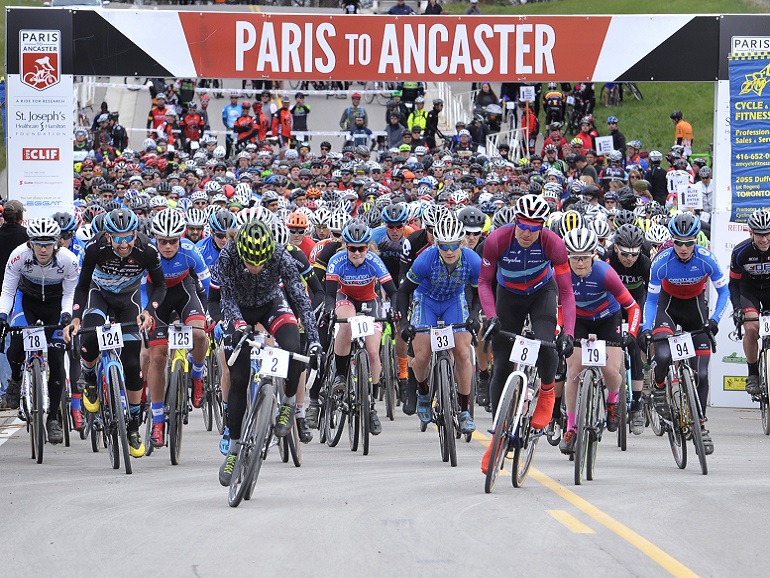 The legendary Paris to Ancaster Bicycle Race returns to live racing on April 24. The popular event will see top riders and weekend warriors of all shapes and sizes head down to Paris, Ontario for the always fun and muddy race. If you don't know about this race yet, where have you been hiding? Here are a few of our favourite tidbits to get you inspired to check out the race this weekend, and mark it on your calendar for next year.

1. The creation of the Paris to Ancaster Bicycle Race was inspired by the legendary Paris Roubaix race held in northern France and it was originally held on the same day. “Lots of people were putting on tribute races around the world,” says Tim Farrar, one of the race co-founders along with John Thorpe. “But ours actually started in Paris, which even the original doesn't start in Paris, France. And so, and for a long time, we had it on the same day. Turns out, it could be as early as, I think, April ninth or the seventh was the earliest date we had it. And finally, at one point, after one of those years, where we'd had some sort of horrible storm, we decided, let's try to make it a little bit later.”

2. This year marks the first major change to the event in many years. The race, scheduled for April 24, is now offering a distance of 100K. The move is designed to attract more top competitors who are used to competing at this distance in other top events such as gravel grinds. “We had been attracting more of some of the top North American teams looking to have their riders in the past two years ago when we last had it,” Thorpe says. “So that was part of the reason we got the 100K as it will become the race event. The classic event, the 70K, will always be there, but our elite competitors can be the 100k. The idea was to make it a little more epic.”

3. But that’s not the only distance. There is a perfect ride for everyone. There are many distances from which to choose so everyone does not have to do the full 70-kilometre race. There are also distances that work well including a 45K and for parents and children who want to ride together, there is a 20K family ride.

4. You race on a bit of everything. The race combines road, dirt, gravel, mud, farm fields, and more in one incredible spring classic.

5. Most of the race takes place on private property that is only accessible to cyclists once per year for Paris to Ancaster. “The classic way we describe it is the worst roads and farmlands we can find between Paris and Ancaster,” Farrar says. “Combination of rail trails, gravel roads, pavement where necessary. The real stars of the show in terms of the racecourse are the sections of private property. And we're allowed to use them one day a year.”

6. There is no perfect ride. Paris to Ancaster is a unique race in that riders will travel over all manner of surfaces including a lot of mud, so although cyclocross bikes tend to be the right choice most of the time, it can and has been done on anything and everything including road and mountain bikes.

7. There is a specially designed training program for those looking to put in work over the winter leading up to the race. “It’s run by a group named Xert, which is an online training platform,” Thorpe says. “And they combine their platform with actual race footage to come up with this. It’s set to match the course so that when you are going up a hill, you cramp up, you know, and when you're going downhill, it’s easy and that sort of thing. And they're back again this year, and they're doing a training program for people leading up to the race.”

8. The event also gives back to the community. Funds from the ride support the St. Joseph’s Healthcare Foundation.

9. You can participate on an e-bike in the 20K family event.

10. The friends and family of participants at this weekend’s P2A can follow along with the SPOKZ app in real-time.

An epic 500K gravel biking challenge in the beautiful Eastern Townships of Quebec
Secret Spots: New Brunswick trail runner Blair Mann's faves
Now could be the best time to plan that cross-country cycling tour
Toronto area runner Elias Kibreab sets new FKT on Ontario's Bruce Trail
What you need to know to start ultralight backpacking this spring
An epic new cycling event from the team behind BC Bike Race
Five places you can camp right on the beach in Canada
What you need to know to start camping this spring