North America is home to some of the most beautiful and diverse landscapes in the world, making it a prime destination for backpacking and multi-day hikes. From the rugged peaks of the Rockies to the serene forests of the Pacific Northwest, there is something for every kind of hiker. In this article, we will highlight the eight of the best backpacking trails in North America for scenery and multi-day hikes.

The West Coast Trail (pictured above) is a 75-kilometre trail located on the southwest coast of Vancouver Island in British Columbia, and it is on many would-be backpackers' bucket list. The trail offers hikers the opportunity to experience the rugged beauty of the Pacific coast, including sandy beaches, rocky cliffs, and old-growth rainforests. It also features hundreds of man-made ladders and bridges that help make it such challenging terrain, which can be quite strenuous, but the reward is the stunning coastal views, wildlife sightings, and the chance to explore the First Nations' cultural sites. Reservations are required, and not always easy to come by. Start your journey at the Parks Canada site. 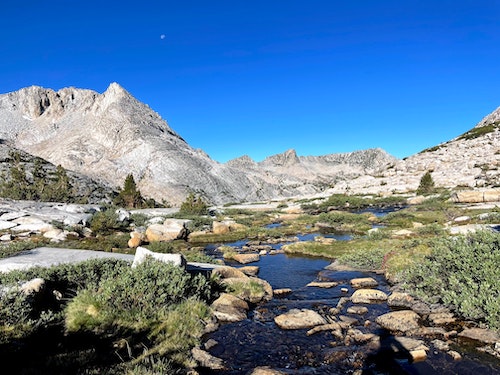 This 213-mile trail runs through the Sierra Nevada Mountains in California and is known for its stunning alpine scenery and high mountain passes. The trail passes through some of the most iconic parks in the state, including Yosemite, Kings Canyon, and Sequoia, and offers hikers the opportunity to summit Mount Whitney, the highest peak in the contiguous United States. This trail is generally hiked during the summer from July to September as there is often snow or snow melt to deal with. The northern terminus is at Happy Isles in the Yosemite Valley. Hit the Pacific Crest Trail Association for more detailed info.

The Pacific Crest Trail (PCT) is a 2,650-mile trail that runs from the border of Mexico and the United States to Canada through California, Oregon, and Washington. The stunning route passes through 25 national forests and 7 national parks. The trail offers hikers the opportunity to experience a wide range of landscapes, including deserts, forests, and high mountain passes. The PCT is known for its beautiful wildflowers, which bloom in the spring, and its stunning views of the Pacific Ocean. This is the trail that author Cheryl Strayed wrote about in her memoir Wild: From Lost to Found on the Pacific Crest Trail in 2012. Hit the Pacific Crest Trail Association for more detailed info. 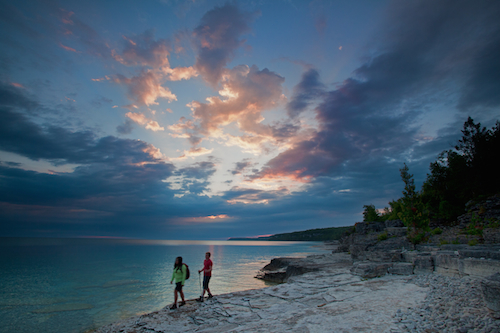 The Bruce Trail is a 890-kilometre trail that runs along the Niagara Escarpment in southern Ontario. And it is beloved by those who have experienced this very rare trail that snakes through parks, and private land. The trail offers hikers the opportunity to experience the beauty of the Canadian Shield, including rocky cliffs, waterfalls, and old-growth forests. The trail also provides access to some of the most iconic natural landmarks in the region including the Cheltenham Badlands, and Niagara Falls. The trail is usually hiked in sections because it's so long, but it can be done in its entirety usually in about 30 days. There has also been a trend to run the Bruce and challenge the new FKTs, if that's your jam. Its northern terminus is Tobermory and the stunning Fathom Five National Marine Park. Head over to the Bruce Trail Conservancy for further information. 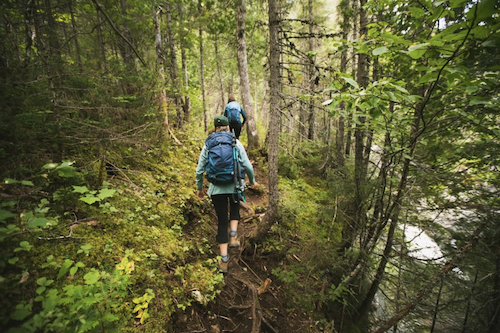 One of Québec’s most majestic and challening backpacking trails, the legendary International Appalachian Trail runs for a whopping 650 km between Matapédia and Cap Gaspé, across the Gaspé Peninsula. Only 15 to 30 hikers (60% men and 40% women) attempt to complete the IAT each year and 80% of them succeed. Ranging from a rural setting in an agricultural environment to the steep cliffs of Forillon overlooking the sea and apssing through the summits of the Chic-Chocs and McGerrigle, this hike offers so much. It will likely take more than 30 days up to 40 days to finish his hike. Head here for more information.

The Wonderland Trail is a 93-mile trail that encircles Mount Rainier, the highest peak in the state of Washington. The trail offers hikers the opportunity to experience the stunning beauty of Mount Rainier and the surrounding wilderness, including alpine meadows, glaciers, and high mountain passes. Check the NPS site for further details.

The Skyline Trail is located in Jasper National Park, Alberta, and is considered one of the most scenic backpacking trails in the Canadian Rockies. The trail offers an incredible diversity of landscapes, from alpine meadows to rocky summits, and passes through some of the most iconic peaks in the park, including Mount Edith Cavell and Angel Glacier. The trail is also a great place to see wildlife, including elk, black bears and mountain goats. Go to Parks Canada to find more information.