Trail-tromping Squamish super athlete and new mom Alicia Woodside on balance, drive and having it all 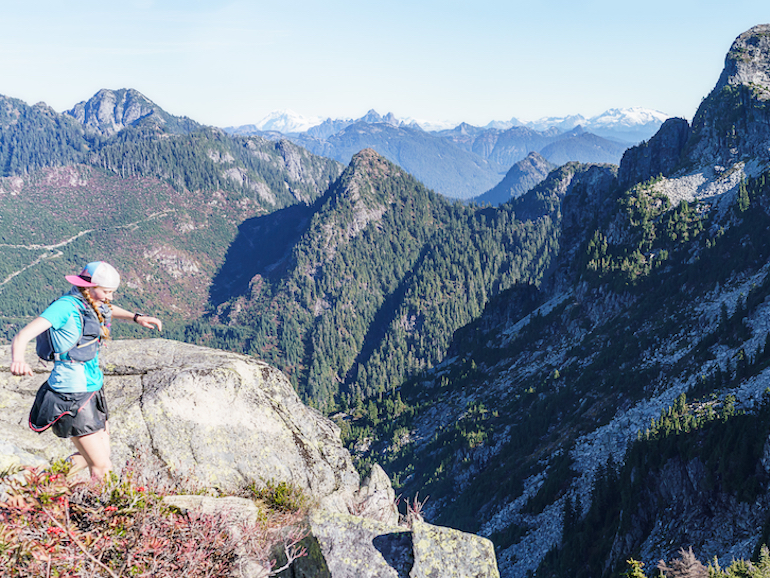 Alicia Woodside is a trail-tromping super athlete who lives in Squamish, BC, and destroys competition at some pretty big ultra trail running events. She’s also a big-time skier, backcountry camper, and pretty much everything outdoorsy in between. She just won the Golden Ultra, for instance. But she’s also a baby backpack-toting member of the new-mommy brigade.

Her last race win came less than a year after giving birth to her first child, Luc. So, we decided to check in with Alicia, who also happens to review gear for Get Out There, to find out how she does it all with a huge smile on her face.

“Parenting is sort of a time warp, in some ways it feels like it’s been forever since I became a mom, and in other ways, it’s very clear that I’m so new. It was my fourth time at the Golden Ultra and I’d had so many problems executing at the stage race through the years,” she says. “So it was a sweet moment to have everything come together this time (for the Golden Ultra), especially during the 60k and most important stage when I found myself leading the race!” 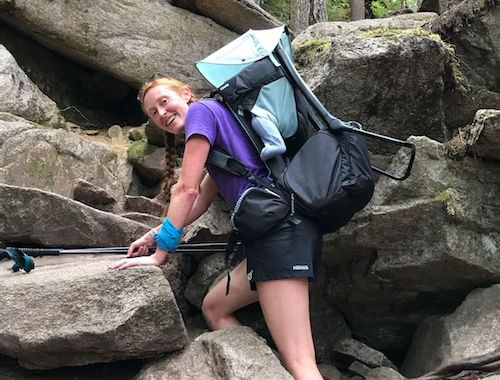 Woodside had what she calls a good pregnancy, and was active, and competing almost the entire time.

“I was out hustling the whole time, doing whatever felt good. Looking back, it was a weighted training camp! Sure, I wasn’t doing intervals or tempo runs (for the most part), but I did all kinds of fun adventures with friends, and so it was never a real break from training,” Woodside says. “Some old-school readers will hate me for this, but I ran four ultras while pregnant! Toward the end, I was lucky to have winter, and I incorporated more skiing of all types and snowshoe running, and even ice skating, which were really low impact, fun, and great training.”

Don’t think Woodside just snapped back into awesome athlete mode following the birth of Luc in January 2022, it took time, but she says she did all she could to get back in shape.

“I think that postpartum recovery is a multivariate equation and that the delivery experience is a big part, but I do think that being happy and healthy gave me the best opportunity for a speedy recovery, and that’s definitely what I experienced,” she says. “I had a notion in my head that if I could minimize my time off sports during pregnancy, it would be easier to get back into it again after, as there would be less of a break. Every week that went by was a mini celebration, as I was so happy for every week that I was still active during pregnancy.”

Woodside adds, that some aren't as fortunate in the recovery after bringing their tiny little miracles into the world, and patience is required.

"Just know that you’ll eventually get there, and that the recovery isn’t necessarily going to be linear," she says. "One day, you’ll be back to crushing your runs again, and with a cute little human to come home to for post-run coffee snuggles!"

She says the most challenging part was probably just being patient and listening to her body.

“I remember doing lots of runs where I just didn’t feel like myself on technical descents, which has always been my strength,” she says. “At first I was frustrated, but then I realized that my inner core muscles needed time to rehabilitate back to normal. It took months to feel a normal core again, and that was hard, because part of you thinks, “will it ever be the same?” (In case you’re wondering, yes, it will go back to normal! With time.)” 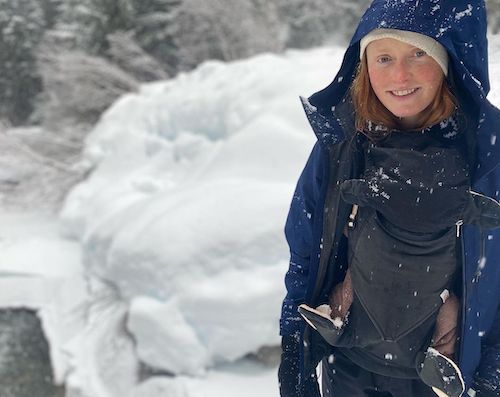 Woodside says the current best practice is to see a pelvic floor physiotherapist at six weeks postpartum, to get a checkup done, before doing any running. And that was her first step before focussing on walking.

“I got out the door every day for walks in the first week, going farther every day, as I felt good. The hospital gave us a handout with lots of rehab exercises, and I did those religiously. After a couple of weeks I was ski touring in Whistler with friends, which was great as I did have a bit of anxiety at the start as a new mom,” she says. “I did a lot of postpartum yoga and strength training videos on Peloton while the baby napped, and I started hiking around week three or four. I went to the physio at six weeks postpartum as planned, and I was lucky to get cleared to run right then, so I integrated running fairly early. At first, I ran every second day, and soon I was going whenever I wanted!”

At first, Woodside says she didn’t follow any structured training.

“I did a lot of stroller runs, and I did a lot of uphill tempo runs, about once a week,” she says. “I did a local 18k trail race in May (at four-and-a-half months postpartum) where I won an entry into the Squamish 50k (pictured at top), so I spent the summer building up my long runs, and getting used to lots of climbing and descending.”

To say Woodside was into sports at a young age is quite an understatement, she did everything, even enrolling in soccer at the age of three because she had too much energy so her Mom lied on the application. She played it all: figure skating, basketball, volleyball, and softball. In university, she walked onto the UBC track and cross-country teams in her third year.

“At first I was terrible, and eventually I inch wormed my way onto the varsity squad as a marathon runner, attending the NAIA Championships in 2008,” she says. “I didn’t place or score any points, but it was a good stepping stone to help me see how much I could improve. From there I just kept running, found amazing friends that pushed me, and eventually realized that you could run in the mountains.”

Now, Woodside is living a mountainous dream life in Squamish where she has her choice of an array of world-class trails at her doorstep.

“I often choose the loamy, runnable trails just out the door in Alice Lake, and then I’m in love with the technical, super challenging Sea to Summit trail at the Sea to Sky Gondola,” she says, highlighting a few of her favourites. “The coolest trail I’ve done in Squamish is at Brohm Ridge, you can run right up to the base of Mount Garibaldi! And just outside Squamish is the Howe Sound Crest Trail, which is my favourite trail I’ve done!” 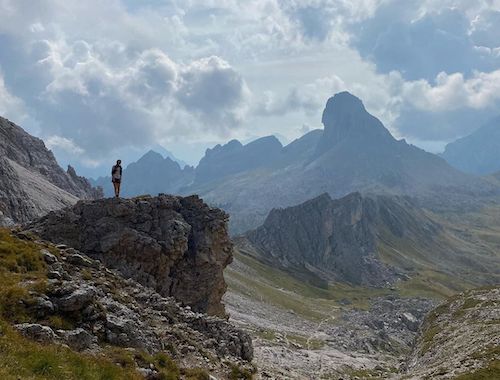 A typical training week at the Woodside household involves solo work ranging from an hour to a weekly long run that could end up taking all day, track workouts when her husband often comes along with the baby in the stroller, and bringing Luc along on adventures.

“I do so much with him! Often I’ll do a big hike with him in the baby backpack, or a stroller run, and I’ve started taking him cross-country skiing in the chariot! Typically I will incorporate Luc into two of my training days per week, and just decide that day whether I feel like hiking, running, or skiing,” Woodside says. “One of my favourite things is hiking him up to the top of the Sea to Sky Gondola on the Sea to Summit trail, it’s about 900m of gain, with snacks at the top, and it’s so fun every time!”

Most recently, Woodside competed in Hawaii at the Hurt100 ultra and she’s also started coaching trail and ultra runners in addition to signing up for a UTMB series race in the Italian Dolomites.

“I’d love to eat as many pastries as I can during that week, and I’d also love to see how I can do in a more competitive international event with my new mom strength!” she says.

As for advice for other new moms, she says setting goals that get you fired up is key.

“Something that makes you excited,” she says. “For me, thinking about those goals got me excited to carve out the time to train. It won’t always feel easy, and things won’t necessarily feel normal for a while, but just keep going!”

But, she suggests trying to think a bit more long-term with the goals.

“Don’t put any pressure on yourself in the first year postpartum, think of it as a fun recovery and training year,” she says. “Then if you're able to train more seriously and race, that’s even better!”