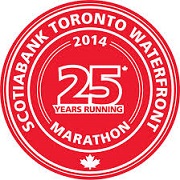 Lanni Marchant, the London, ON native, returns to STWM with enormous experience

A year ago Lanni Marchant made history by shaving half a minute off the Canadian women’s marathon record at the Scotiabank Toronto Waterfront Marathon, a time that, incredibly, had stood for twenty-eight years.

Marchant’s time of 2:28:00 shocked many.  And, now the London, Ontario native returns to the scene of her greatest accomplishment to tackle another world class field but with the benefit of some enormous experience.

Almost forgotten in the record breaking hysteria which followed last year’s race was the fact that Marchant, and fellow Canadian Krista DuChene, had finished 3rd and 4th in this IAAF Silver Label race against a very tough international field. An invitation to this year’s Boston Marathon followed and she finished 14th. More recently she represented Canada in the Commonwealth Games and recorded a solid 4th place.

Marchant, 30, looks forward to the challenge in Toronto but is cautious knowing that people will expect a record.

“I am really excited to come back,” she declares. “Obviously last year went really, really well for me so I wouldn't mind to see if lightning can strike twice. But also I wanted to come back and do a fall marathon because I know I am still really fit after the Commonwealth Games.

“I kind of let my workouts the next four weeks or so kind of dictate what pace I will shoot for (in Toronto). But I am still feeling really strong after the Commonwealth Games and it kind of made sense to keep the ball rolling.”

Her eagerness to race in Toronto had been apparent even as she prepared for the Commonwealth Games. Conversations with Race Director Alan Brookes indicated she wanted a place on the starting line but would wait to see how well she recovered from the Glasgow race.

“The Commonwealth Games was the quickest I have ever recovered from a marathon,” she emphasises. “I wasn’t all that sore right after. It shows I am that much more prepared when I come into these races.

“I took a week off running, did a few little jogs here and there, mainly because I was getting a little bit of cabin fever in the Commonwealth athlete’s village. My first week my mileage was pretty low but I have been progressively upping my mileage each week I have been back.”

Marchant’s time in Glasgow was 2:31:14. Though she was ecstatic with achieving her target of a top five finish, afterwards, she thought about how she might have whittled down another minute or so and taken the bronze medal. Indeed, she was one minute and two seconds behind bronze medalist Jess Trengrove of Australia.

“Obviously I wanted a medal. When you finish 4th you are the bridesmaid never the bride,” she says laughing. “I didn’t run a poor race. I actually stuck to the race plan that my coach and I planned. There was no regret after that race. The medal would have been sweet; there was nothing I, as an athlete, could have done differently in my preparation; nothing I can regret.”

“Each run I am still learning. That’s kind of the fun part of it. Boston was such a different race to what (2013 IAAF World Championships) World’s and Toronto had been and then the Commonwealth Games was very different from all of them.”

Clearly she and coach Dave Mills believe she can run faster than her Canadian record but only when all the necessary factors line up: the buildup, the competition and the environmental conditions. Pressed to offer a target she might go after in Toronto October 19th she is once again cautious.

“I will kind of trust my training and make the game time decision like I did last year as to what kind of shape I am in when I toe that line,” she says. “Obviously every track and field athlete wants to throw further and run faster.  My coach and I were talking the other day and we definitely think there is another couple of minutes there but knowing when that can be, well?

“Hopefully I can keep it up going to Toronto this year and down the road for the Olympics etc. I am not going to put that pressure on myself always having to ‘PB’ or set a record or run to other people’s expectations. I want to make sure it’s still fun. If the next four weeks of training go well and I line up and I want to go sub 2:28 I will try to do it and let the race play out like it does. If the training goes well but I don't feel great then I will line up and try to go for a solid 2:30 or whatever my body will be prepared for that day.”

If her response appears as if she’s keeping her cards close to her chest, much like one would expect from a lawyer, it’s because she has returned to her criminal law practice in Chattanooga, Tennessee. Though she is Canada’s top marathoner at the moment, that doesn’t pay all the bills. Besides she is comfortable with the hours she puts into her law and, when that day comes and she laces up her shoes purely as a recreational runner she will no doubt focus completely on her chosen vocation.

Meanwhile she has a few more years of international class running in her before that day comes. And there are minutes to shave off that Canadian record. Here’s hoping everything lines up well for her at the Scotiabank Toronto Waterfront Marathon October 19th.

VR Pro's fall running series arrives with two festive faves
Trail running is easier on the body, and good for the spirit, no wonder everyone is loving it
Our 25 favourite hikes in British Columbia
An insider's guide: Climber Sierra Blair-Coyle's favourite spots in Arizona
Next Weekend: An outdoor adventure guide to Lake Geneva, Wisconsin
Here is what you need to know about ultralight backpacking
Canada Goose is dropping a bold and pricy new luxury footwear collection
25 of the best places for a fall hike in Quebec