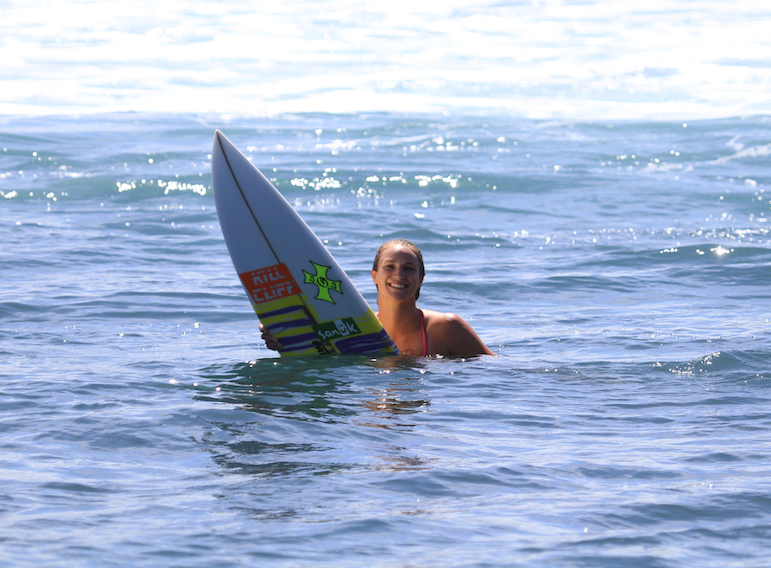 And she could compete for Canada in the 2020 Olympic Games

Victoria, BC native and current Maui, Hawaii resident Paige Alms is one of the best big wave surfers in the world, and she’s redefining the sport for the next generation of young wave riders. She was nominated this past April for the World Surf League’s Big Wave Awards for Women’s Best Performance (and for Wipeout) for an epic ride on Jaws, Hawaii’s legendary oceanic beast.

Born and raised in Victoria, Alms and her family moved to Hawaii when she was just seven years old.

“I remember a lot of time playing with kids in our neighbourhood, skateboarding, biking, soccer, you know, kids stuff,” she says. “I remember going into the ocean in Victoria and I remember our trips to Maui to visit. Victoria was obviously a lot colder. I had no idea what surfing even was really back then.”

Although her first formative dips into the (comparatively very cold) ocean were off the coast of Vancouver Island; it would be a year later before she flopped onto a surfboard for the first time. Still, a Canadian is a Canadian. And Alms could be wearing the maple leaf soon enough if she earns a spot to compete for Canada at the 2020 Olympic Games in Tokyo.

“I didn’t surf til I was about eight, I had a lesson in Australia,” she explains. “Then when we moved to Maui when I was nine, I got pretty comfortable on a body board. It wasn’t until I was 10 that I started surfing. I remember being very determined to be good at it. I remember when I’d fall on a wave, I’d think instantly what I did wrong and how to improve on the next wave.” 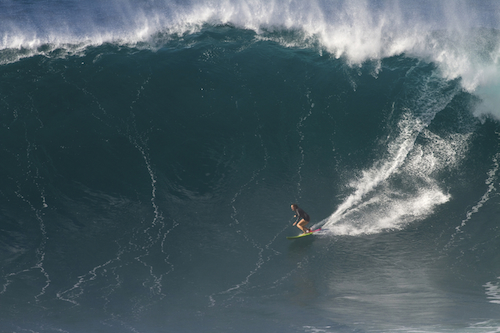 “I just loved being in the ocean and it was a means to express myself the way I wanted to,” she says.

And, although she says she loves surfing in all shapes and sizes, her concentration on big waves was more a product of her Maui surrounds than anything else. To surf in Maui means surfing big or staying home and eating pineapple. Alms surfed big.

“Surfing bigger waves was just a natural progression of growing up on Maui and my wanting to better myself in the water,” she says. “You’re surrounded by big waves and big wave heroes on Maui, so it was something that just kind of… happened.”

She surfed her first big wave when she was just 15 years old. Three years later, at 18, she rode Jaws for the first time. Jaws is located on the north shore of Maui and is considered one of the top big waves anywhere.

Alms did try her hand on the pro tour, but it wasn’t meant to be.

“When I was competing on the WQS, I didn’t have a main sponsor. So travelling to events was hard, I couldn’t do the whole tour, I had to pick and choose and only do a few. It’s hard to be in the mindset to fully qualify if you can’t even do all of the events,” she says. “Also, the main events that I dreamt about competing at on the WCT, had all been taken off the tour… Honolua, Fiji, Tahiti… So I found myself questioning why I would even want to be on the tour. It was just timing… I think everything happens for a reason.”

Her career has landed her solidly in the big wave camp, travelling the globe in search of monster waves. In so doing, she has become a role model for young surfers coming up in the surfing world where young women who are generally steered more into the bikini and Instagram world.

In a film about Alms’ life, world champion Carissa Moore singled out Alms as an inspiration.

“I find it one of my biggest goals and what I am most proud of when kids come up to me and say that I inspire them,” she says. “I think being an example for the next generation is what it is all about. As I was influenced by the top athletes as a kid, I hope to do the same.” 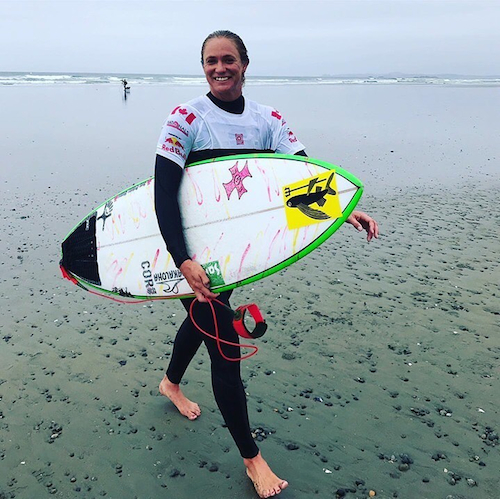 In May, Alms was in Canada to compete for a spot on the Canadian team with an eye to the 2020 Olympic Games, the first time surfing will be included in the international amateur sports competition.

Alms made the team alongside fellow Canadian women Bethany Zelasko and Mathea Depfle-Olin and on the guys’ side, Shane Campbell, Peter Devries and Cody Young.

"I'm beyond stoked to start the Olympic pathway process alongside an amazing team of athletes," Alms says, who explained that it was the first time her mother was back on Vancouver Island since the day Alms left when she was just seven years.