This year, runners can meet Captain Obvious and be serenaded by a choir

One of Ontario’s most storied running races, Around the Bay, is back and scheduled for  March 26, 2023 in Hamilton.
Hamilton’s Around the Bay 30K Road Race is the oldest on the continent, first run in 1894, three years before the Boston Marathon.

In addition to the traditional 30K distance, Around the Bay also features a 5K and a popular two or three-person relay option for the 30K, as well as the second year of the popular Hammer Hybrid option, explains race director Anna Lewis.

“The Hammer Hybrid is presented by HOKA.  Participants would virtually run a 2K, 5K, 10K, and 15K during our virtual race period between March 1 and March 31,” she says. “And then run the 30K in person with us in Hamilton on March 26 to complete The Hammer!  All the Hammer race category run times are added together for your Hammer Time.”

Registering for this option also includes both a short-sleeve and a long-sleeve shirt, medals for the 5K and 30K as well as a special Hammer souvenir shirt. 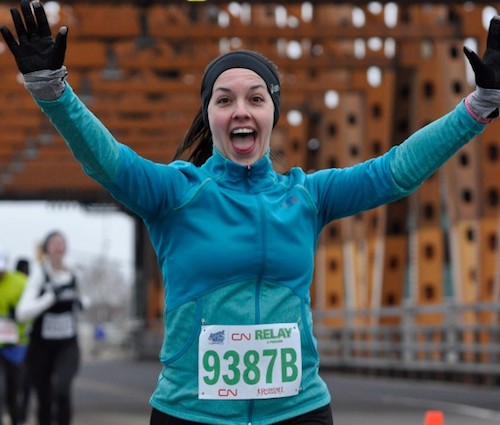 This year, if participants register or upgrade to the HOKA Hammer Hybrid/Virtual Hammer by Jan 31, 2023 they will be entered into a free draw for an “ultimate HOKA Prize Pack. The Prize pack will include running shoes, recovery slides, and select HOKA accessories!

But, the 30K classic distance remains the race that defines Around The Bay. The unique distance takes in the entirety of Hamilton Harbour. Lewis thinks it’s the ideal prep race for marathon season.

“It is a unique distance at 30K so a perfect training race for a spring marathon and to keep focused over the winter,” she says. “It is an accomplishment to complete this race because it means you trained over the harsh winter, you conquered the hills and Valley Inn Road, and you ran 30K!”

Since its inception, Around the Bay has drawn fast runners from around the world to race its unconventional distance, including Canadian William Sherring, who won the Olympic Marathon in 1906; Tommy Longboat, an Onondaga from Six Nations who won the Boston Marathon in 1914; and Lanni Marchant, a record-holding Canadian long-distance runner who broke the Around the Bay’s women's course record in 2013 at 1:44:40.

As is tradition with the race, there is an event expo planned for this year as well as a pasta dinner the night before the race at Chagall’s restaurant.

Lewis says one of the reasons the race is so popular is the community.

“I think the community engagement has been a key feature of this historic race,” she says. “For instance, the residents on Beach Blvd banging their pots and pans cheering on runners. The strip has been coined, Tin Pan Alley.”

Not only that, racers can also expect to hear Stan playing “We Will Rock You” at Valley Inn Rd., maybe they will have a chance encounter with Captain Obvious or even the Grim Reaper on York Boulevard. Also, the West Plains Church Choir will be singing to runners on Plains Road.

It’s that kind of race.

For more information or to register for the race, please go here.

See you out there.